It’s something most of us will have to deal with at some point in our lives – to one degree or another. For some, it will simply mean listening to the litany of aches and pains and the hassles of Medi-Care (a quagmire in itself.) For others, it may mean taking on the role of caregiver and “parenting” your elderly parent.

Whatever the degree, whatever the role – it’s a tough thing. No one likes to think of their parents as “old” – admitting the aging of your parents means admitting your own aging. No, most would rather hold to an image from when their parents were reasonably young and healthy – still vibrant, vital.

I’ve always been exceptionally close to my mother, and never knew my father – divorce and his death a year later sort of got in the way of that (and probably a good thing, but that’s another story). My grandparents played a big role in my life, but they were always “old” to me. I am the “baby” of the family and Mom was 31 when I was born. My images of her are those of a woman essentially in the prime of her life – youthful uncertainty replaced with the wisdom of age, a woman who knew who she was and comfortable with it, and one who had blossomed beyond the fresh girlish “pretty” of youth and had matured into a truly beautiful woman.

Those are the images I have of my mom. Sure, there were health problems, sure there were times when those images were not true, but by and large, she always appeared younger than her years.

Maybe it would have been easier if we still lived close by and the transformation had slowly unfolded before my eyes. But it didn’t. Several years ago, Mom and her hubby moved across the country – the first time in my life I had ever lived more than a few hours from Mom. For most of my life, aside from times in school, I had been within 30 minutes of her house. 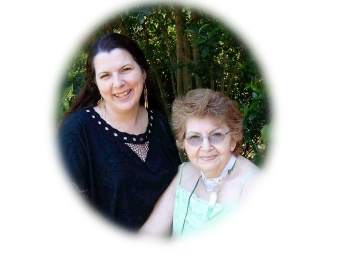 Mom visited in 2005, and she was still looking pretty good – still not seeming “old” to me. Then illness stuck and in 2006 when I visited, for the first time I saw the shadows of age creeping up on Mom – but still she seemed herself. The picture is from that 2006 trip…

It wasn’t until April 2007 that I had that real shock. Coming into Mom’s house and seeing a frail old lady – I was stunned to realize that was my mother. The faded, tissue thin skin lacking her usual “peaches and cream” glow, the washed out hair, no longer gleaming bright auburn, but instead tinged with a little grey and turned drab were hard enough. Seeing her hunched over a walker, shuffling along and looking like a stiff wind would knock her over then carry her away was equally bad.

The worst part, however? The part that hit home the hardest?

Mom has always and forever been a woman who made sure she looked her best – at all times. She didn’t leave the house without at least lipstick, her hair was never less than perfectly coifed, her clothes always neat, always stylish – even when she would garden, she looked good.

And yet, there she stood wearing a housecoat – something I had never, ever in my entire life seen her wear. She may have in private, but certainly never where anyone could see her.

Mom is 69 now, not old by today’s standards, but she looks older. She looks frail and sickly. She looks like an old woman. How, in just a few short years, did she go from looking still vibrant, still beautiful to this tiny crone?

The answer? Illness. It plays a part. Age is part of it as well, and the two combined have dealt a blow from which I believe there is no recovery. She will never regain that which is lost. And I have to accept the fact that Mom is “old”.

My siblings and I are planning a trip to visit her next year for her 70th birthday, and for the first time, I really have begun to wonder if she will still be around for it, and if so, will she be well enough to enjoy it? I have to believe, no matter how frail, no matter how ill, that having her kids at her side for her birthday would be a good thing. For the first time in my life, I have truly accepted my mother’s mortality.

That sounds silly, I know. But it’s just not something that had ever truly hit home before. Now, I can’t avoid it.

And so I start digging, searching for old photos, suddenly realizing these memories, these snapshots will all too soon be very, very precious to me.